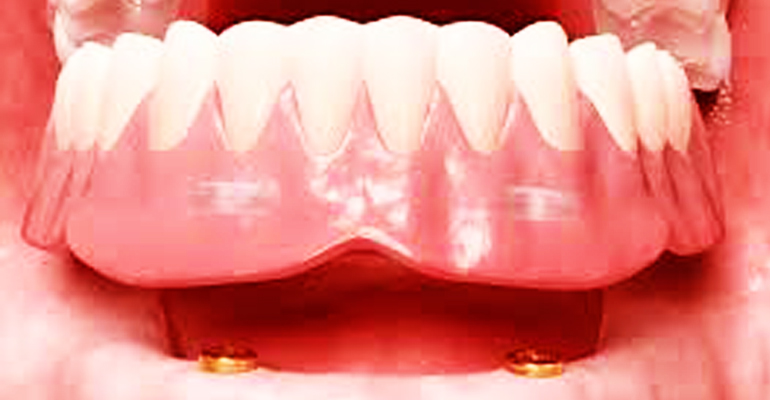 The lower two implant overdenture represents a simple, effective and predictable solution to the problem of edentulism. Since the treatment only requires two implants for most people to restore an entire jaw, it is within the financial reach of many so afflicted people. It results in a remarkable improvement in oral comfort and a significantly improved ability to chew most foods, and consequently a person's nutritional status. It eliminates expensive denture creams and adhesives along with their potential medical side effects. This dental implants procedure at Americas Dental Care takes just two visits on a period of 4 to 6 months.

Now lets talk about the how is everything done

This session generally involves making an incision in the gums and placing the implants in the jawbone. After the implant is placed into the hole (drilled in the bone), we will stitch up the incision. The temporary denture is then positioned in such a way that no direct pressure is placed on the implants and soft reline may be necessary to take the pressure off your gums.
The timing of the second procedure depends on whether the implants were placed in the upper (5-6 months later) or lower jaw (3-4 months later). This period is to allow the bone and implants to biologically ‘fuse’ together in a process known as Osseo integration.

Following the Osseo integration process, the implant is ready for the second procedure. We would confirm whether the implants have become fused with the bone by taking an x-ray. In this follow-up procedure, a small incision would be made in the gum to expose the tops of the implants.
Once the implants have become fused with the bone, the second procedure can be scheduled. We confirm whether the implant is ready for the second procedure by taking an X-ray. This surgery is simpler than the first, which involves making a small incision in your gum to expose the tops (heads) of the implants.
At this final stage, depending on whether a denture needs to be made, you are ready to have the initial try-in of the new denture. The artificial teeth would be temporarily placed on the framework in wax. If everything checks out, with the whole denture tried in your mouth, the teeth would then be permanently lodged in the denture framework. Depending on the type of implant-supported denture you have selected, either the ball , Locator or bar attachments will be secured at this junctur.
Most importantly, studies indicate a consistently high level of patient satisfaction for the two-implant overdenture when compared to the conventional denture, and a general improvement in quality of life. This represents a major change for the dental profession and the public in the management of edentulous patients, suggesting that the lower two-implant overdenture may be considered the more appropriate starting point over regular dentures. At Americas Dental are you may be a candidate for this dental procedure, please ask about it. This simple treatment can profoundly change someone's life for the better, maybe yours or someone you know!

How much savings can you expect on your next Dental Trip

Sign in for news letter and special dental packages

Just sit and relax with our World Class Dental Practice you will find lifetime dental support and all inclusive dental implants. Will be more than happy to have you as our patient.

This treatment can be done over natural teeth, implants or both combine.

Over natural teeth $5400 PER COMPLETE ARCH

All on Four with titanium arch and acrylic denture, including dental extractions if needed as well as oral sedation